Posts : 1864
Honor : 22
Join date : 2012-09-18
Winpose wise i was gonna take that folded arm Ryu pose where his headband is flowly and whatnot, and sprite edit that into that Ken, and make those little orbs

He crosses his arms before doing it as if blocking but hes powering up.

This is actually from a chinese SF3 comic but the story is nothing like the game of course haha.

I was actually gonna can Ken and any characters altogether. Not that I didn't want to make them, but imo dead engine is dead right? but being in the chat + finding my old files and wips, i kinda been getting the itch back. might also help that i have access/proprietary right over a laptop now.

I digress. so like, i was being a lil troll last night and went on MFFA and put this status up to see who i could piss off, but surprisingly I got a decent amount of positive feedback/agreement

I'mma use my old wips + Ken as a means to make a general base for chars i wanna make (was scrolling thru and forgot about a few I intended to do. like most of the sffs are done already)
im prob also gonna steal/modify a lot of code to save time but it won't be recklessly done like these edits I see nowadays.....

My one end all goal is to finish my Fortuna stage. I was on to something with it but now that I see it years later, I can do more to it. If I don't do anything else, this is my must-finish project. It's something for myself.

If EVERYTHING goes well, I'll finish a 5 year old/late collab i was doing with Mark and Watta, despite how I feel about one of them.

sidebar, im also finishing my screenpack. didn't originally plan to release it since its an uncommon res, but i'd rather it exist out there for someone to enjoy yknow

engine is still dead to me tho

idk why i started this but im so tired. its over 100 sprites and i still gotta add the bg people. theeeen i gotta add the reflections, THEN i can start coding it all in (AFTER indexing the 100+ sprites from my psd)

When I was chillin in the discord server, i had a random select cursor idea come into my head so i quickly mocked it up (less than 5 min) so I may try for a HD SP if i feel motivated enough to.

Obv super barebones but I needed to get that out of my head real quick, you get the idea.

Posts : 1088
Honor : 50
Join date : 2010-02-28
Get that lazy bug out of here.lol just picking my man, how the heck are ya. I'm good, I like that so bare bones idea. Maybe do a black and white sp, with ink animations. Also, give it a melty blood super bg's. Like the ones Raja, did for most of his characters. I might be wrong on the game, but hope you get the idea. Food for thought, wish you good on all your works.

I might actually go with that ink idea, but prob not the way you think. Something more fluid. Like ink dropped in water. 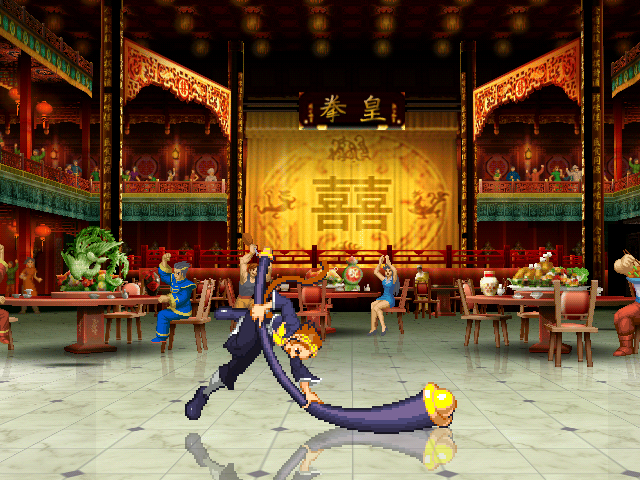