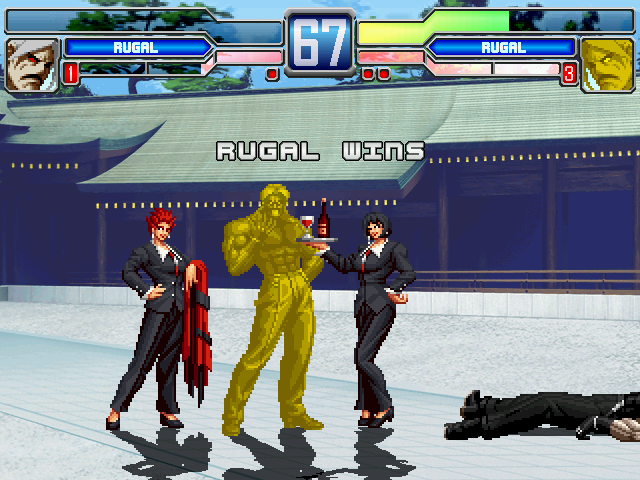 GONZO- hosted his MUGEN creations via his personal Japanese FC2 Website & Blog, DEATH UNLIMITED.
While he does not always get the same credit or notoriety as many of his Japanese veteran counterparts,
GONZO-'s early contributions and creations place him among the founding fathers of the KOF MUGEN scene we know of today. 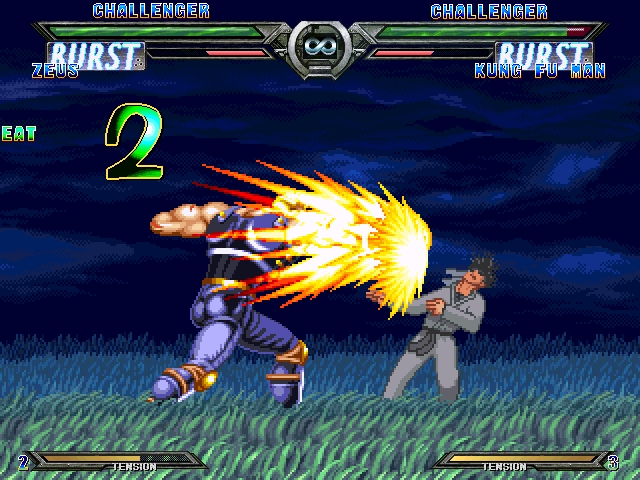 Along side his fellow Japanese Creators whom he was well associated with, AHURON, JIN, and BAD DARKNESS,
GONZO-'s KOF BOSS character creations have continued to serve as the foundation, standard and base for countless KOF character edits,
which are still being released to this day.
There are also allegedly publicly unreleased Gonzo/collaboration KOF characters that remain privately curated by some retired Japanese Creators.

The popularity and notoriety of GONZO-s work can be attributed to 2 factors.
No.1 being timing: He was one of the first early KOF character creators making quality releases as far back as 2004.
No.2 being Popularity: The KOF Boss roster of OROCHI, Rugal, Igniz and Goenitz etc were exceptionally popular during the mid/late 2000s and that trend of Boss vs Boss KOF OP battling has become a fundamental part of the KOF Mugen community as a whole, with KOF Boss on Boss fights being almost a singular Mugen Sub Community of its own still 15 years after their initial release.

1.Location: I live in Toshima-ku, Tokyo, Japan.
2.Nickname Origin: I got the nickname GONZO- in college from a teacher. It was a country ass sounding name so that's why they called me that....(lol)"
3.Hobbies: My Internet addiction, Movies, Metal (the music genre), Anime.
4.Favorite Food:Fried rice. curry. ramen. Salmon.
5.Fav Season ... Autumn?
6.Fav Music ... Melodic Heavy Metal. Especially from Nordic countries.
7.Fav Manga / Anime ... JOJO, Baki, one step.
8.Fav Games ... Fighting games in general. I like SF III 3rd Strike quite a lot.
9.Most Disliked food ... Wasabi pickles, broad beans.
10.Things I'm not good at ... Cleaning my room, picking up women, dealing with people with no common sense
11.Countries I want to go: Finland.
12. What do you want the most? ... money.

GONZO-s approach to MUGEN creation is very practical and logical, and his releases were of the highest quality standard in terms of gameplay and foundation.
In a blog post on his DEATH UNLIMITED Mugen blog, GONZO- once wrote what may be the most prolific and sound advice that many aspiring mugen creators still struggle to understand to this day:

To people starting out that know nothing about Mugen:
It's difficult making a character from scratch - start off by messing around with existing characters.

There aren't many sites that teach all the MUGEN ropes from start to finish, But there's plenty of info out there.
Asking a lot of questions on forum help threads is good, but People repeating the same cycle of questions over and over whenever they don't understand something is ignorant
hence not much can be expected from it
It's much better to look stuff up and try understand it yourself.

In short, I think creation is difficult for people who can't get information themselves.
After all there is no shortcut. .. ..
If you like fighting games, you will remember things naturally.
We all start out in mugen knowing nothing after all right?


Gonzo's last known Mugen activity was in December 2010 when he made his last and final updates to his Arrange version of SVC Chaos Gouki.
His characters often featured extra hidden modes, additional sprites and move-sets, and maintained a level of accuracy to the KOF source games while also offering innovation
or subtle move changes where he saw necessary.
The fact that his characters and coding are still being referenced and used in KOF Mugen creations over 10 years after their release speaks volumes on the strong foundations he laid.

Download All GONZO-'s official work here
[You must be registered and logged in to see this link.]