Most of his/her characters are mainly made for AI vs AI spectacle battles, particularly on the Twitch streaming website called [You must be registered and logged in to see this link.].
MoloMowChow has been creating mugen content since at least April of 2018.

MoloMowchow describes his/her introduction to Mugen via the SpriteclubTV community:

I first got very interested in M.U.G.E.N when a Youtuber called Joel from Vinesauce had a fan M.U.G.E.N game created for him by a creator called Brergrsart. I thought it was overall hilarious. When I looked up Brergrsart and found his webpage, he mentioned that all this characters are showcased in a Twitch Streaming website called Spriteclub. I ended up visiting that stream regularly because I liked seeing thousands upon thousands of different M.U.G.E.N characters from all sort of creators duke it out in various matchmaking arenas.

As I started to mingle and become more familiar with the community, I started to get more and more interested in trying my hand at making a M.U.G.E.N character myself. Once I got an idea to make a series of characters based on an web game I play often, that's when I really got into it. I looked up various tutorials online and got help and feedback from the veteran creators of the Spriteclub community (and even from Brergrsart himeself), and after about a month in time, I was able to create and release a character to showcase on Spriteclub stream.
It isn't the most sophisticated character or anything like that, but it was interesting for viewers to watch. It was a well received debut and an overall great success that made me really happy. 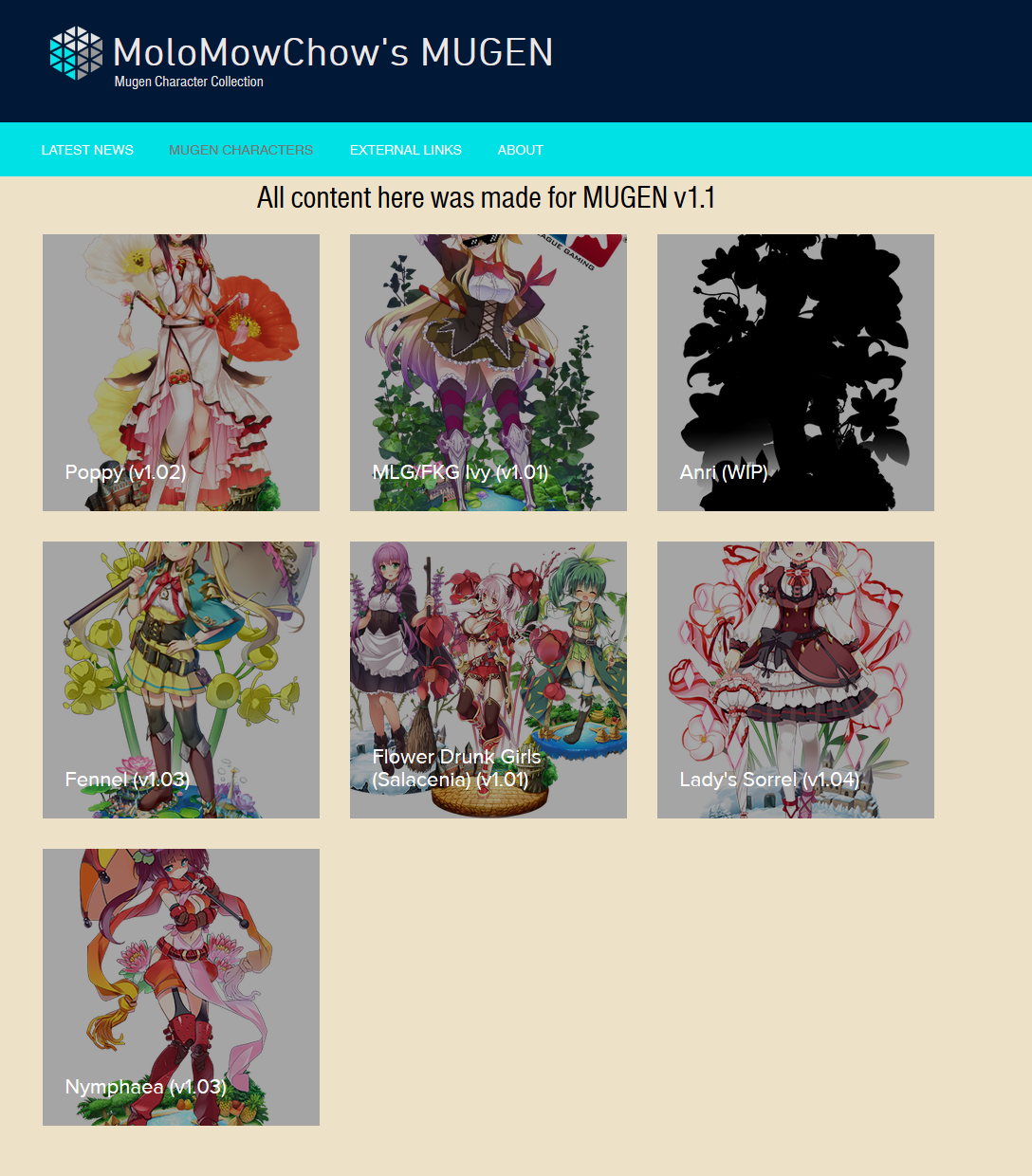 Character Previews
Downloads
[You must be registered and logged in to see this link.]

Hoshijaku
[You must be registered and logged in to see this link.]

All Dohna characters have been updated with lots of bug fixes and a few additional content. Details of which are in their readme files. Check them out in the Other DL page!

I also plan to upload a video detailing the new additions to the characters, so stay tuned for that.

Kuma has been released (v1.01)! He features a fully functional assist system with 6 selectable characters!
Check him out in the Other DL page!

Kirakira has been updated to v1.04 to achieve parity with Kuma's release. Details of the patch can be read in the readme file.

Kirakira v1.04 Patch Notes are in the Readme file

An update for Kirakira has been released (v1.03b), please redownload her in the OTHER DL section

Patch notes in the readme file

A hotfix for Kirakira has been released (v1.02), please redownload her in the OTHER DL section

Patch notes in the readme file.

There has been a lot of confusion with my character's sprites not showing up on people's Mugen setups. Make sure that on top of using MUGEN v1.1, that your RenderSetting option in mugen.cfg is set to OpenGL, or else the sprites won't show.
This notice has also been added to the top of the download pages.

An all new character has been released! Check out Kirakira in the new OTHER DL section of the site

Slight changes to the About Me and External Links pages

I have gone through all the Flower Knight download pages and made minor visual changes, corrections or info updates to the pages (the characters themselves are the same, I just updated the web pages). Some web pages as a result now have different URL addresses. If you've bookmarked any specific character pages, it'd be a good idea to update you bookmarks. Sorry for the inconvenience.

MoloMowChow wrote:For M.U.G.E.N v1.1
Make sure the RenderMethod setting in mugen.cfg is set to OpenGL or the sprites won't show.

The newest version is always available at this webpage here:
[You must be registered and logged in to see this link.]

Kuma is a port of a character from Alicesoft's RPG called Dohna Dohna. The game is set in a city controlled by a single powerful corporation that has become disrupted by the emergence of clans: gangs of ne'er-do-wells that perform various criminal acts. Kuma, the main protagonist of the series, is the second-in-command of one such organization: Nayuta. He is tasked with increasing his clan's power through criminal activities. Along the way, he and his allies must contend with rival clans, as well as the corporation itself, while unraveling a greater conspiracy surrounding the city.

Note on Controls:
Just like the last Dohna character I made, Kirakira, this character originally came from an RPG, and lacks any proper movement animations. As such, he doesn't walk back or forward like a normal fighting game character. He can only move via jumps or dashes forward/backward. This also means no crouching either. This can make positioning difficult at times. To compensate, he has a strong moveset that utilizes his long range gun attacks, and his hops forward/backward are mostly invulnerable (except grabs).

He exclusively uses a handgun in the RPG, and ended up being a heavy zoner-type character here as a result. He plays completely different from Kirakira, with his own gimmicks and systems separate from her, and thus should be approached/played differently. He has an ammo system that uses a bullet every time he fires his gun, and must reload periodically. He also has an assist system that allows him to call allies for help, which is a throwback to him being able to do the same in the original RPG. He uses the Assist system to supplement his combat. Combined, this allows him to keep distance and pelt away with his handgun.

For more details on his controls, check out his readme.

This character took way longer than Kirakira due to the assist system taking up more than half the devtime. I had wanted to work on Kuma next because he felt like the perfect excuse to make an Assist system, since he can calls allies for joint attacks in the original game and I've always wanted to try making an assist system for awhile now. After looking at some other MUGEN characters as references (mainly MvsC2_Thanos by Iwakick), it came out pretty good. But I wasn't prepared for how long it took.

Making a menu system for all the assists was way harder than I first thought. I had to restart completely at one time because I realized the menu graphics I was initially using was way too messy to be practical, and had to make new ones. It's still not quite perfect, as stages with custom zooms will make the assist selector cursor smaller sized. I haven't found the time to fix it yet, but it's a purely visual bug.

I was originally planning to have 9-10 selectable assists on release, but after taking 3-4 months making six assists and not finding more time to work on MUGEN, I decided to put the assists on hold and work on releasing Kuma himself instead. I would like to add more to the assist system in future updates, such as more assist characters, and secondary moves for each assist. Likely will update Kuma between actual character releases.

I had difficulty with all the UI elements as well. In the end I just opted to conform to the screenpack I was using, but most likely the feet of the characters will be covered on most stages depending on the zoom and lifebar graphics one is using. I may look into adding adjustable UI elements for the Config.txt file in the future, if time allows it.

On an unrelated note, some of you might be disappointed I wasn't working on one of the female cast this time. I'll be returning to them soon, don't you worry about that  :8):

This character was originally made for the purpose of AI vs AI spectacle fights, and wasn't meant for human challenge.
But it is fully controllable, and nothing is stopping you from playing as or against this character.