Spoiler:
-We all saw that insane regen coming from a mile away
-So my initial guess at Kanae being a girl was correct.
-Hehehehe eto needs some more clothes under them wraps

EVERY CHAPTER IS SUCH A CLIFF HANGER GOD DAMN IT

These chaps are mind fuckery i swear

Spoiler:
so eto bangs the ghoul, then they get super regen. cool.
I still see Kanae as a guy, but i guess this makes the Tsukiyama obsession less...creepy?
HOW THE FUCK CAN HE SEE WITH HIS EYES SHUT LIKE THAT THO
Kaneki is back?

Genesis wrote:what that mouth do tho eto

YO NO Kanae is definitely a woman. They made it pretty clear through the chapter with Matsumae and the other servants discovering her "secret." She often felt sick and tired as she got older (menstrual pain). She also had that panel with her wearing feminine clothing by that lavish bed. She also said at one point "I'll bring you to that bed."

It was her parent's goal for her to bang with the next Tsukiyama head (Shuu) so that their family bloodline would continue on. 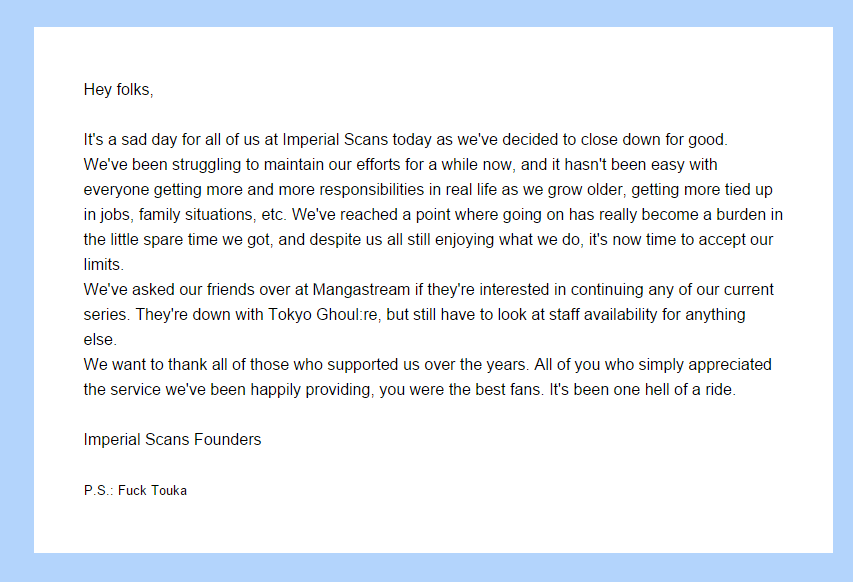 i got legit sad (ok for like 5 seconds but still)

Guest
Talk Of The Town (Wood)
Recieved 5 or more likes from other Members
★★Dark Master Of Fists★★
Newagemugen Member for over 10 Years
The dude who supplied them with the raws early got busted by the feds, so Imperial ran for the hills, who could blame them? Good news is that Manga stream is going to pick it up, bad news is they need to find staff to work on it.

Spoiler:
-Eto marry me plz
-Furata op as shit
-Noro op as shit
-Everyone op as shit
-Looks like we finally got Kaneki back :')
-Touka kill yourself

Guest
Talk Of The Town (Wood)
Recieved 5 or more likes from other Members
★★Dark Master Of Fists★★
Newagemugen Member for over 10 Years
It's ass whooping time. :PunkSmirk: 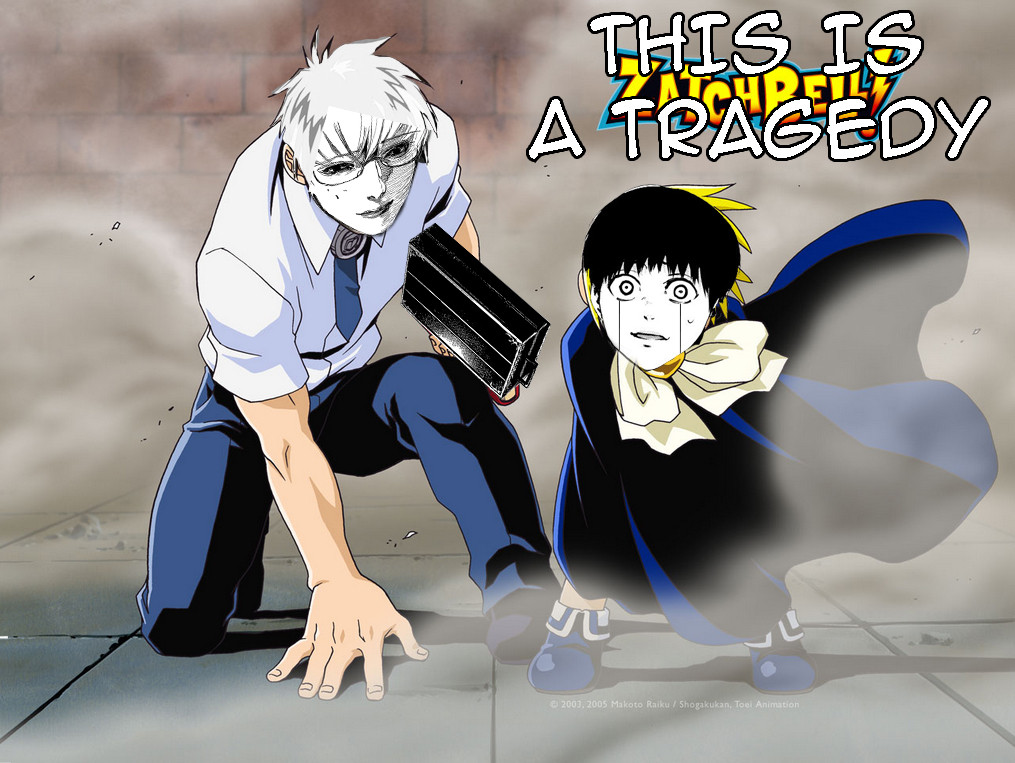 inb4 one eyed king is uta

What do you think Shirazu is doing then, talking to himself instead of using the radio to contact Haise?

Why the fuck do you think he's saying "sassan" anyway? Is that the name of his spirit animal?

>>133760272
But Kaneki like mature and Intellectual woman.
Eto fits both criteria

>>133762576
Why does Eto even like him?
At best, she should see him as a threat to her power and hunting territory and instead, all she does is CAW CAW around in her groul form, hoping while opening her wings as if she's trying to impress a male to breed with.


Oh yeah Furata is Souta from the clowns :)

There's also this theory that Kaneki was raped by Yamori, and it's not a joke ._.

Guest
Talk Of The Town (Wood)
Recieved 5 or more likes from other Members
★★Dark Master Of Fists★★
Newagemugen Member for over 10 Years
Tumblr always thinks a character has or is being raped. you can whistle at a dog and they would assume you're trying to assault it. I don't think Ishida ever hinted that Kaneki was raped by Yamori. Perhaps they had him change clothes due to his old ones being drenched with blood.

Real Kaneki aka no fucks given, kill any bitchmade ghoul/CCG, the real OG Kaneki Ken has ariived.

Shirazu the next MVP, dude just went in by breaking all his limits.

Urie actually cares about his team more than his PRUMUTION woah

Here's a translation of the chapter, if you're interested Zeroz. Gen doesn't like spoilers lol. I wouldn't see this as spoilers to be honest because it takes them forever to get out a new chapter now that our chinese scan dude got busted.

Kaneki’s throwback
Nico: Kaneki kun, the one eyed king is….. (perhaps the bandage)

Kaneki: …….Tsukiyama san
Tsukiyama got stabbed on the chest by Kaneki(?)
Tsukiyama: Gahh!! *vomits blood*
Eto: Its okay. Thanks for the pitiful show. Well then, who is stronger between you and Arima Kishou.
Kaneki: The pitiful one is you, go and die

im pretty sure the clothes change was just to like....give him new clothes.

True kaneki is a beast. shits on everyone. kinda bugs me how irrelevant Tsukiyama became during all this...where is that kakuja powaaaaaaaaa
edit: gdi watta stop posting when i post mothafuka

Guest
Talk Of The Town (Wood)
Recieved 5 or more likes from other Members
★★Dark Master Of Fists★★
Newagemugen Member for over 10 Years
Pic shows Kaneki was the one who attacked shuu, No fucks given Kaneki, The OG laying his foot down and is butchering everyone.

His mom whipped his ass a lot so I assume the original Kaneki before the bitch made Kaneki was a vicious little shit.

★★Thousand Dragon★★
Posted over 1000 Messages
Talk Of The Town (Wood)
Recieved 5 or more likes from other Members
★★Dark Master Of Fists★★
Newagemugen Member for over 10 Years
Lord Of War (Gold)
Obtained The Highest Tier 3 Warlord Class Rank
Heaven's Door (Silver)
Created 20 or more Unique Topics
Posts : 2844
Honor : 0
Join date : 2011-11-23
Yeah this is probably his real inner self. He is no longer oppressed by the CCG or the half ghoul conflict within himself.

THE BEAST IS HERE

★★Thousand Dragon★★
Posted over 1000 Messages
Talk Of The Town (Wood)
Recieved 5 or more likes from other Members
Lord Of War (Gold)
Obtained The Highest Tier 3 Warlord Class Rank
Published To Perfection (Gold)
Created 30 or more Unique Topics
卍♆★Divine Overseer★♆卍
Verified Senior Forum support/assistant/curator
★★Dark Master Of Fists★★
Newagemugen Member for over 10 Years
Posts : 1863
Honor : 23
Join date : 2012-09-18
I think Kaneki was always a bitch. He probably internalized a lot of anger, hate, and other emotions. During his cycle of growth, he finally gained enough power to kick some asses.

Even though this is the real him, I wanna say this is also the accumulation of all those different personalities in one person.

I think it's still too early to confirm if Eto is the one eyed king because keep in mind that it was Nico who told Kaneki that information. The clowns are too hard to predict so it's almost a 50/50 chance if he was lying or not. It would make a lot of sense if she was indeed the one eyed king though.

I really don't want to believe that Noro is going to be killed for good by the scrub squad :(

★★Thousand Dragon★★
Posted over 1000 Messages
Talk Of The Town (Wood)
Recieved 5 or more likes from other Members
Lord Of War (Gold)
Obtained The Highest Tier 3 Warlord Class Rank
Published To Perfection (Gold)
Created 30 or more Unique Topics
卍♆★Divine Overseer★♆卍
Verified Senior Forum support/assistant/curator
★★Dark Master Of Fists★★
Newagemugen Member for over 10 Years
Posts : 1863
Honor : 23
Join date : 2012-09-18
I don't personally believe she's the one eyed king because why show us that damn panel with the king with the armor on to begin with? likewise would Aogiri seriously take orders from a woman like Eto if the yknew she was in charge?
Watta stop trying to confuse me. She is the OEK(at least their stand-in). That last chapter basically confirms it. The first time we saw that scene, he never said that part about it being the girl in bandages. Nico may be part of the group of clowns, HOWEVER their info be on point bruh. They manipulate the fuck out of situations, but they tell the truth for the most part. 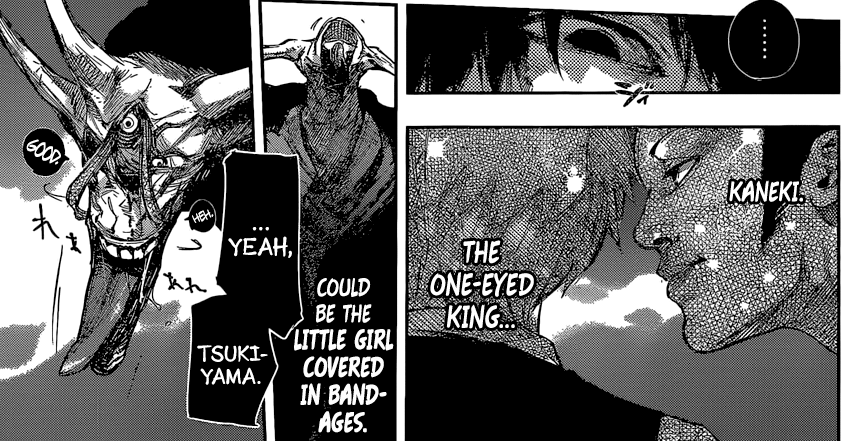 If she's not the OEK, i have only two other theories...

The "Kanou is the One Eyed King" Theory; He's untouchable, and why would he not give himself some kind of advantage if he thinks so highly of ghouls? Clearly the Qs are evidence that a human can get and utilize a kagune with no major repercussions (that we've seen so far).
He seemed pretty friendly with Eto and Tatara (more so that they weren't inclined to kill hiim, but i feel like Eto knows him)
Considering Eto could hide her kakugan and roam around like a human, maybe he can as well?
One Eyed ghouls can also enter facilities that have special detection of ghouls undetected

My more recent theory, "There is no King, yet."
Remember way back when, I said it was strange that Tatara said Kaneki's kakugan was too weak? (back when they first introduce Aogiri)
Tatara and Eto basically run the show, but maybe they need someone strong enough to lead ALL ghouls against the CCG/humanity. Maybe it's some naruto bullshit where giving the half ghoul another kakugan unlocks some bullshit powerup. idk. maybe they will literally create a ghoul....? idk i forgot where i was going with this theory, but yeah

Unrelated, that panel when they talked about Kanou having a bodyguard, the head sure looked like Arima. It's too perfect. Arima has been OP for a while, and i've always speculated hes got ghoul in him somewhere. Kanou could've added something to him.... His hair turning white isn't coincidental, and this latest chapter simply proves the white hair is an association with ghoul/ghoul genes (i'm also looking at Takizawa).

Eto probably has the highest chance of being the OEK, but I personally think that it would be like anticlimactic as hell if she was. Just saying since Ishida loves making us shit ourselves with plot twists.

And as for my theories

Spoiler:
I'm too lazy to have any.