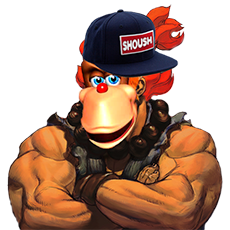 Check out his videos here My Ansatsuken is a Chilean Mugen character creator specializing in highly stylized POTs style hybrid "CVS3" characters.
He is best known for his infamous Multi-mode Gouki/Akuma which includes fully playable Oni and Shin Oni modes.
It is arguably the most "complete" rendition of CVS Akuma/Gouki.

He has also done conversions of other characters by authors such as Hero, which include higher quality hitsparks, fullscreen effects, and better compatibility with Mugen 1.1 and its widescreen/zooming features.

Noteworthy is that he is one of the few creators to also include fully Mugen 1.1 only versions of his characters with 32bit PNG support etc.
Mr Ansatsuken has been active in the Mugen community since atleast 2013. As of 2018 he is still active, however he has left on several occasions announcing his retirement, only to return shortly after.
Download All Mr Ansatsuken's official work here
[You must be registered and logged in to see this link.]


BROLY HAS BEEN RELEASED!
The Legendary Super Saiyan, Broly has been unleashed!
And he chooses YOU to be the first of his victims!