Posts : 957
Honor : 249
Join date : 2013-03-09
Hey guys i need your expert opinions for something in the works...Post images of your favorite lifebar set of all time. Of course if you have more than one favorite post more than one. Or, if your favorite lifebars havent been converted to mugen yet, post the in game images of them too! Comment on why you like them, particular parts of the design you like or improvements that could be made to them. Eitherway, double post, tripple post, flame away with your images. Your help will be appreciated!!!

Posts : 957
Honor : 249
Join date : 2013-03-09
yeah I thought syns were next level shit. the only one of 2 lifebars with super gauge vertical instead of horizontal I ever seen on mugen.
Syn got hated on 4 those due to the oversized ggx mini radar thingee that took up half the screen. But really he was just trying to test the limits of mugen n people didnt appreciate it.

Posts : 366
Honor : 2
Join date : 2012-12-06
NAM LBs [it's not even a valid ?, lol]
Marvel Super Heroes 1.0 by @wlacobain
.Hack LBs (unfinish'd) *glares at Genesis*
Nexus Reborn, N. R. 1.0, & Origins 1.0 by GrayFox
Tekken 3 LBs by Kyokano, sounds slightly edited by me
Rage Of The Dragons LBs by RYO2005 [tho i feel they're off a bit, mainly cuz that jump gust is a tad overboard]
Roar LBs by EX Shadow [i wanna covert'em to 1.0, but don't know how, & i would prefer another announcer voice]
SFA by ArcTheLad, coverted to 1.0 by Toxiic [i feel they're still lackin' tho; not enough round anim options available, nor tha sounds to go with'em]
SFZ-Inspired LBs by Ryon [same feeling as stated above]

Kut Kreator wrote:NAM LBs [it's not even a valid ?, lol]
Roar LBs by EX Shadow [i wanna covert'em to 1.0, but don't know how, & i would prefer another announcer voice] 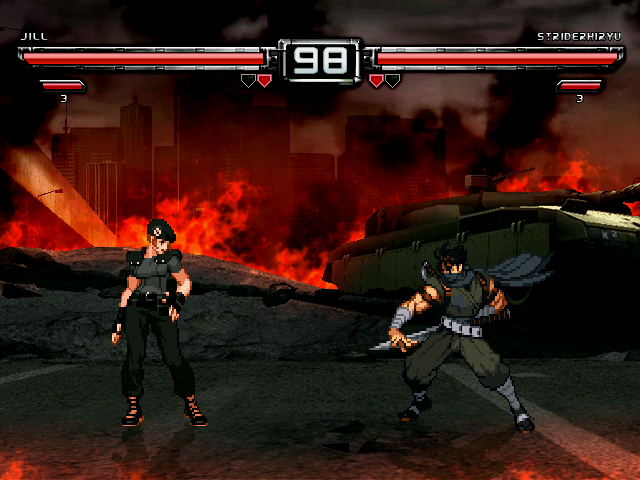 Posts : 366
Honor : 2
Join date : 2012-12-06
tha vids of tha bouts with me &/or my boyz Sinister & SoundWave goin' at it [with more of my peeps joinning tha fray soon] take place at SoundWave's crib. heck, i don't even wanna try doin' this online; even tho i know it's possible, i like bein' able to customize my chizz tha way i see fit. besides, it's alwayz a blast to battle my boyz, we've all been goin' at it for years now, & probably won't stop anytime soon, lol

glad you dug tha melee my dude. i'll be postin' another 1 in my thread later, so keep eyes out.