After looking at various sprite sets, who should be next?

Been a while, huh? Current news is this, Link's hookshot has been removed (For now). I am currently working on a hyper that will include a cluster of arrows followed by a bomb toss, and an aerial projectile that utilizes the basic bomb toss (Using the same helper method utilized with Sailor Mars' charm attack). In addition, I am going back and updating Sailors Uranus and Pluto, whose updates I have left unfinished for too long now.

Tried the Scorpion method and it bugged out horribly. Until I can find a better method, or someone who would want to collab on the effort, I'm leaving it out.

Thanks to aperson98, Link will have his Hookshot in the next update. Along with that, there will be some bug fixes that are currently being addressed, and a remapping of his controls. I know that many who have downloaded him have already gotten used to the controls set in place, but Cybaster did raise some good points with his suggestions and feedback. Be ready for a potential weekend update.

So, my character run has been as follows so far: Reworking PoshPsylocke's beyond bugged Sailor Moon characters (The Sailors themselves), and the recently released Link (Using Ax's sprites and some of KBN22's edits). Now, I find myself in a time in which I don't know what to do next. I've had some ideas, but I'm curious as to what you people think. For this, I have instated a poll.

The way the "Other" option will work is that if a suggestion comes up and it gets 2 nominations, then I will update the poll by adding the nominated suggestion. If any sprite set that is currently in the poll fails to receive any votes, it will be removed from the poll.

In the end, the top two will be made, with the number 1 most voted being done first. Looking forward to any ideas you may have.

Maybe you could work with some of chucoryu's sprites?

I could do something with those sprites. The thing that makes me a bit nervous is that those characters are from games I more than likely have no experience with.

Well, you can make them in your own custom gameplay. Nobody will hate you for that.

Also, hit a slight snag. Got a PM from an admin at Multiverse (Yeah, I posted there as well), and they already have someone doing stuff with Ax's Joker. So I guess Joker's out.

@NapoleonJonamite wrote:
Also, hit a slight snag. Got a PM from an admin at Multiverse (Yeah, I posted there as well), and they already have someone doing stuff with Ax's Joker. So I guess Joker's out.

Yeah, just make what you want.

Who cares if somebody else is making a joker yo, it's almost guarantee'd that they will both be very different.

Oh, and making your own gameplay sounds cool yo

Well, I PMed TayBear about this already, but I haven't back from him yet, so I'm going to post this anyway.

So, I now have some new sprites for new animations. Thanks to aperson98, I have an aerial kick and the aerial bomb toss. And thanks to Manniku, I have a new stance for him as well. My only problem right now is that when I create the pcx images, I keep getting color errors of some kind either in PS or FF. Any assistance I can get on this, I totally welcome it.

Well, this is a very sad moment in my career. I attempted coding an AI for Mars using the methods implemented for 1.0, and let me just say she is PATHETIC! I knew my experience was lacking, but I didn't think that in learning how to code a 1.0 AI I'd fail this badly. If you wanna see what I mean, there's a video below this text. I'm all for any volunteers to help tweak it so I can understand what I did wrong.

https://www.youtube.com/watch?v=Fx3bOJrEWGk (It may be a while as the video was still processing at the time I was writing this post)

Well, I want to do Joker, but I opted to wait until whoever's currently working on him to finish his version before I do mine (That, and I haven't been able to find any Injustice voice rips for Joker). Until then, I received permission from Chochuryu to use his sprites for what I will announce as my next WIP: Ryu Hayabusa from Ninja Gaiden (Modern version)! 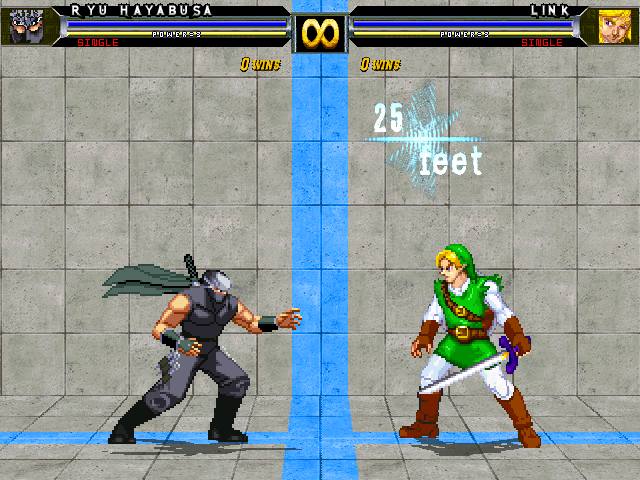 The things I'll need to do include adapting him to the NJ gameplay style, maybe a new small portrait, MVC hyper portrait (Have a template, need art), maybe a new big portrait, and create at least one new hyper combo.

Hopefully Ryu will go more smoothly than Link did, but will match Link and the rest in terms of quality.

Okay, I've been thinking some of doing something that would essentially be a re-skin of something I have already released. In this case, it would be Sailor Moon using her classic uniform. I recall there once being a Sailor Moon released a while back using the same sprite style as the ones in all of my Sailors. Only thing I've noticed is that this one doesn't everything that my version has in terms of sprites. A good amount of the sprites available in the original are just like the ones in mine, here's the standing animation of the original "Classic" Moon next to mine:

As I go through them, I'll state which sprites/animations I'd need done in the classic uniform. There are some moves I'll leave out of mine when remaking the classic one. I know this isn't either of the original projects I had planned, but this is something I can easily do while I wait on the needed new sprites for both Hayabusa and Joker.