How to get a perfectly smooth looking sprite (no hard edges)

Rank Hunter (Bronze)
Obtained The Highest Tier 1 Initate Rank
★★Dark Master Of Fists★★
Newagemugen Member for over 10 Years
Heaven's Door (Silver)
Created 20 or more Unique Topics
Posts : 131
Honor : 3
Join date : 2011-11-22
How to get smooth looking sprite like the vegetation in front of the characters ? especially appreciable with vegetation since it's a FUCKIN PAIN to cut manually... anybody who tried to cut out a tree out of an imag knows what I am talking about. 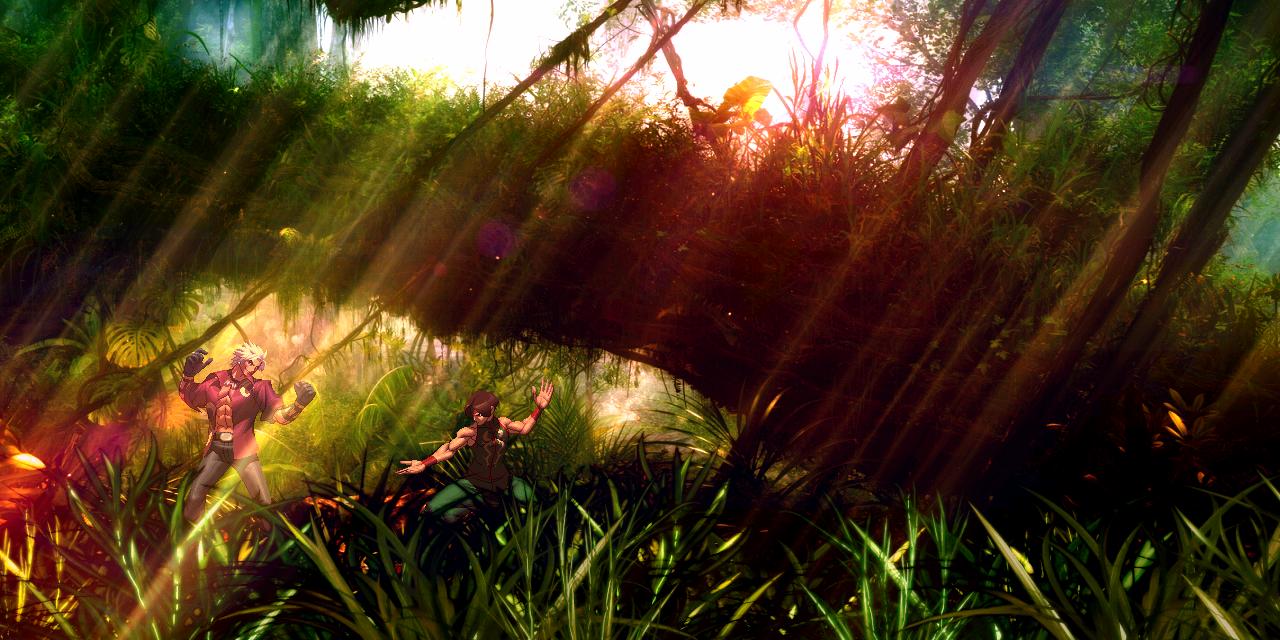 You need "2 LAYERS for each sprites". Let me explain myself.

You will first look for an image with transparency (a PNG image usually) like this one:

* Actually this image above is even smoother than the real original one I found because:
I duplicated the layer, gaussian blurred by 2% the layer on the top and made it using "Lighten" transparency mode. Then I re-merged them together. I use this technique very often because not only it smoothen the edges but it gives a nice shiny look.
Lighten trans mode is one of the several trans mode available in any decent image editor like "Screen" or "Overlay" or "Multiply" etc etc. If you don't have them, change your fuckin image editor...

Then you create 2 layers with this image. (Remember it MUST have transparency initially, if not there are other methods but it's fucking annoying)

To create the "sub layer" you will turn the transparent image of the plant into this by increasing luminosity to the maximum.
Then you create a second layer, put the layer BEHIND the plant, paint the layer in black, and merge the 2 layers.

Now HOW do you GET an image with transparency you ask ? Well you can either

- Cut manually WITH ANTI ALIASING (= anti hard edges) but it's annoying most of the time adn you will suck at it lol.

- Find images on Google images or DevianArt (great website) by adding the keyword "PNG" or "alpha channel" or "stock" to your research.

- Use a function or plugin that substract colors: for example if you get an image of an eagle that has a perfectly black background, your plugin should be "intelligent" enough to erase the black behind the eagle. It will also erase the black inside the eagle but that's ok. recoloring manually the inside is much easier than cutting out borders, trust me. The black recoloring of the part inside the eagle that lost black, must be done on a separate layer BEHIND the actual eagle. Then you merge them together

★★Thousand Dragon★★
Posted over 1000 Messages
★★Dark Master Of Fists★★
Newagemugen Member for over 10 Years
Lord Of War (Gold)
Obtained The Highest Tier 3 Warlord Class Rank
Heaven's Door (Silver)
Created 20 or more Unique Topics
Posts : 2284
Honor : 18
Join date : 2011-04-20
This is just a hunch but I think Jean retired from Mugen. His name in the Guild changed to "ciao", which means goodbye? What's going on!?

★★Stage Sage★★
Stage Of The Year Winner
Rank Hunter (Bronze)
Obtained The Highest Tier 1 Initate Rank
★★Dark Master Of Fists★★
Newagemugen Member for over 10 Years
Published To Perfection (Gold)
Created 30 or more Unique Topics
Kindred Spirit (Bronze)
Liked 5 Forum posts
Fanservice (Bronze)
Recieved 20 or more likes from other Members
Posts : 149
Honor : 40
Join date : 2012-02-28
I thought this method was known by more people, I figured it out while making the omk stages(since they require tons of these layers for brightness and good blending) yeah, it is great. :P

MarkPachi wrote:This is just a hunch but I think Jean retired from Mugen. His name in the Guild changed to "ciao", which means goodbye? What's going on!?

I saw him logging in free for all yesterday. I've not seen him in guild tho.

I have decided to redefine my priorities in life. You won't see me on MFG anymore at all.
Ironically I left for the same reason Jesuszilla left, and his website, TrinityMugen, will be the vestige of my work.
On the top of that, a second reason is that it is for the better. Less time on MFG means more time to be used constructively.

I won't post my new creations through topics anymore. You will have to check the stages section on TrinityMugen.

I might also create a list of "friends" that will have access to my stages if i was to make some more stages in the future. The downloads would probably be protected by a password I will give to this restricted list of persons.
But that's not sure yet. For now, everything remains accessible to the public.

For those who want to contact me, you can still pm me here or trinity but i will be less present than before.