★★Thousand Dragon★★
Posted over 1000 Messages
Talk Of The Town (Wood)
Recieved 5 or more likes from other Members
Lord Of War (Gold)
Obtained The Highest Tier 3 Warlord Class Rank
Published To Perfection (Gold)
Created 30 or more Unique Topics
卍♆★Divine Overseer★♆卍
Verified Senior Forum support/assistant/curator
★★Dark Master Of Fists★★
Newagemugen Member for over 10 Years
Posts : 1863
Honor : 23
Join date : 2012-09-18
the first half makes it long, but it gets dope when you finally get to the dragon
and you can go back when you're finished for extra side quests

Aight I'll check it out. What was the other quest mods you recommended?

★★Thousand Dragon★★
Posted over 1000 Messages
Talk Of The Town (Wood)
Recieved 5 or more likes from other Members
Lord Of War (Gold)
Obtained The Highest Tier 3 Warlord Class Rank
Published To Perfection (Gold)
Created 30 or more Unique Topics
卍♆★Divine Overseer★♆卍
Verified Senior Forum support/assistant/curator
★★Dark Master Of Fists★★
Newagemugen Member for over 10 Years
Posts : 1863
Honor : 23
Join date : 2012-09-18
Other than Undeath, I think i only recommended getting quest dlc in general, i still havent finished most of my quest mods (because mod conflict and when theyre all active they try to take over and bombard you)

Newsboy (Stone)
Created 5 or more Unique Topics
★★Dark Master Of Fists★★
Newagemugen Member for over 10 Years
Lord Of War (Gold)
Obtained The Highest Tier 3 Warlord Class Rank
Posts : 504
Honor : 1
Join date : 2010-04-18
Oh i have plenty of reason as to why i cheat skyrim, on my first playthrough i made it to the dwenmer ruins puzzle quest, had the shit glitch out on me so i couldn't complete it, didn't know about the mission cheats at the time and the game started to get boring to me...so now cheats all day, don't care.

I used TCL today so I could fly like a boss walk to The Reach fast enough. Had some problems, game glitched, and my dude was like floating around in the air with broken limbs while somehow I was watching from another camera 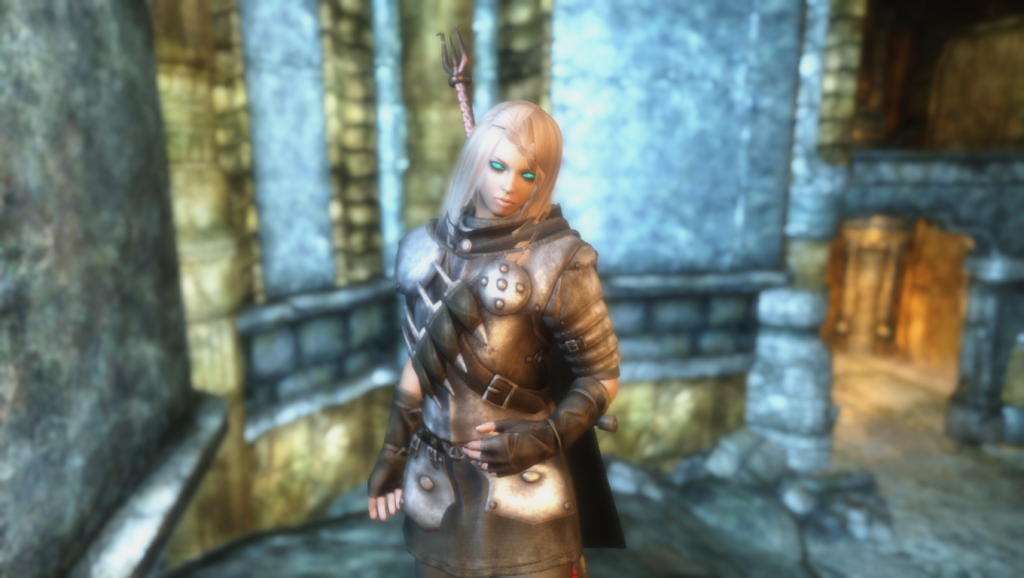 ★★Thousand Dragon★★
Posted over 1000 Messages
Talk Of The Town (Wood)
Recieved 5 or more likes from other Members
★★Dark Master Of Fists★★
Newagemugen Member for over 10 Years
Lord Of War (Gold)
Obtained The Highest Tier 3 Warlord Class Rank
Heaven's Door (Silver)
Created 20 or more Unique Topics
Posts : 2844
Honor : 0
Join date : 2011-11-23
Why is the lighting soo vibrant? I find it unsettling... Is it ENB?

★★Thousand Dragon★★
Posted over 1000 Messages
Talk Of The Town (Wood)
Recieved 5 or more likes from other Members
★★Dark Master Of Fists★★
Newagemugen Member for over 10 Years
Lord Of War (Gold)
Obtained The Highest Tier 3 Warlord Class Rank
Heaven's Door (Silver)
Created 20 or more Unique Topics
Posts : 2844
Honor : 0
Join date : 2011-11-23
It's a glitch. He is supposed to be killed by Mora (daedric prince tentacle dude) at the end of the battle when you defeat him. Perhaps that is what is screwing up.


SO like I downloaded a ton of immersive/overhauls for skyrim to improve the gameplay to make it less boring.

- Alternate Actors - it's glitchy as hell, I think it's becuase it's conflicting with the newracemenu mod I put up. Need to fix this...
- Better Magic Overhaul - it adds a lot of things in the magic system which Bethesda should have added themselves
- Equipping Overhaul - because I like having a 100 equipped on my body.
- Hunterborn - it looks cool
- Immersive Patrol - adds some surprise fights every now and then
- Midaas Magic - it has a lot of endorsements so I thought that I should give it a go
- Open Cities Skyrim - OMG EVERYBODY NEEDS THIS! It's EXTREMELY useful, especially for those who hate loading screens
- Rayeks End - a really really cool, ambient player home with a very unique look
- True Bound armors - heard AZ saying something about it on chat, so I thought I might as well have a look into it
- Civil War Overhaul - omg, you have to read the description page on NMM for this mod, the dude who made it is hilarious lol. This is a very good mod which replaces the backbone of the skyrim world: the civil war. It adds a much more realistic feel and a lot more features. He basically did what Bethesda was going to do but didn't. Bethesda only half finished the civil war aspect of the game when they released skyrim so this guy basically took all the ideas they had and added them into the game, as well as his own.

The Civil war overhaul requires you to start a new game, so I did. I'm a full Altmer Mage this time instead of a warrior because I want a more complex system. The magic gameplay has been improved with some of the mods above, and it's looking pretty fun so far.

I also got this "Become King of Riverrun" or something mod which adds a big castle-hold in between riverwood and whiterun. It looks very good so I though I might try it out.

Dissidia wrote:I'm planning on getting Skyrim. What mods do you recommend?

Okay Diss, I'm gonna say this direct. Skyrim has A LOT of stuff which may seem confusing at first but you're more than smart enough to figure this crap out.

What you should do is have a go through the original gameplay if you haven't already, just for reference.

For mods, check out this website
www.skyrimgems.com
^ This website has a compilation of mods which are specifically selected to enhance gameplay without killing immersion. Basically, you get what skyrim SHOULD have been without getting random as hell light sabers in the medieval age.

Apart from anything in that website, check out this guy's videos (they're VERY helpful)
https://www.youtube.com/user/Brodual
He reviews good skyrim mods so be sure to check them out.

Also, I would recommend these mods...

System
-Skyrim Texture optimizer (if you want to gain a lot of FPS, I need this to run Skyrim efficiently)
-SkyrimUI (MUST MUST MUST HAVE to run A LOT of mods)
-SKSE (script extender which A LOT of mods need to play properly)

Armors and Weapons
-Jaysus swords - very good
-Weapons of the Third Era (MoS edition)
-Isilmeriel LOTR Weapons Collection (really nice swords)
-Immersive Armors (v7 is 900+ MB so I haven't got it myself yet, but the armors are very nice)
-Immersive Weapons
-Deadly Mutilation - damn this mod adds a lot of realistic mutilations from power move KO's in-game. Quite graphic and gorey so be warned

DLC (not actually mods)
-Make sure to get your Skyrim updated to 1.9.somethingsomething. I believe they call it "Skyrim Update 11" since you have to DL it with Steam or through other means. (Maybe it was 12...)
-Get Dawnguard DLC for skyrim
-Get Dragonborn DLC for skyrim
-Get Hearthfire DLC for Skyrim (it's just a DLC for making your own house and stuff. Pretty boring. Most people don't bother getting this)
If you can, buy/get the Legendary Edition of Skyrim which comes with all of this already packed :)

Essentials
-Simple Followers Mod (normal skyrim only allows 1 follow, but you have up to 15 with this mod. This helps A TON when facing higher leveled monsters

)
-Inigo - best custom made follow ever. More than 1000 lines of custom voice recorded lines with this guy. he's quite funny too.
-Uncle Sheogorath's Helpful Tips - funny little mod
-Skyrim Unofficial Patch (get the ones for the DLC's too) - fixes many things Bethesda was too damn lazy to fix


There's a lot of good mods for you to get. I'm still getting a bunch right now. Make sure to get Nexus Mod Manager to install your mods automatically and painlessly :)

I told him ahead of time to get the Legendary Edition (assuming he has it now).

Get your hands on TES5Edit, and use it to clean your master files (there is a video on this, it explains why you're doing this and whatnot.) It has greater uses but since you won't be doing anything crazy (as far as I know) just cleaning your main files will be enough.

Definitely get SSME and ENBoost. I never get CTD's (crash to desktop) since i got it.
Also, take a look at this when you understand stuff a little more, it's a stability mod. http://www.nexusmods.com/skyrim/mods/50244/?

If you're willing to spare the space, get the Audio Overhaul mods and the Fantasy Soundtrack Project. iirc there are 2 or 3 of them and they are 200mb each. The added music is WAY better than vanilla skyrim's which gets repetitive and bland. You also get extra sounds like animals, waterfalls, shit like that.

Personally I like to use Unique Grasses and Groundcovers
https://www.youtube.com/watch?v=unr2WKP0uGM

There's an AIO download and when installed comes with an installer which allows you to choose different texture sizes, so obviously you should use the smallest on your pc and you shouldnt get a performance hit.

Get the Cutting Room Floor mod, it basically implements the unadded content Bedestha had created.

DEFINITELY get the Civil War Overhaul

Thornrock is one of my favorite player houses. I highly recommend it. Has a weapon room, a ar- know what, here's a video.
https://www.youtube.com/watch?v=ftmC3up6XR0

Albeit very subtle, i recommend getting the Remove Interior Fog mod.

Newsboy (Stone)
Created 5 or more Unique Topics
★★Dark Master Of Fists★★
Newagemugen Member for over 10 Years
Lord Of War (Gold)
Obtained The Highest Tier 3 Warlord Class Rank
Posts : 504
Honor : 1
Join date : 2010-04-18
No no no no no, what you wanna get is some Cbbe, Tbd or UNP body mods, then you wanna get eventide (horse on fucking fire, it looks really beautiful) some appachii's hair, better faces(think thats the name) cause them vanilla chicks are rough as fuck face wise, become king of skyrim mod is another good one. thats all i can think of right now

★★Thousand Dragon★★
Posted over 1000 Messages
Talk Of The Town (Wood)
Recieved 5 or more likes from other Members
★★Dark Master Of Fists★★
Newagemugen Member for over 10 Years
Lord Of War (Gold)
Obtained The Highest Tier 3 Warlord Class Rank
Heaven's Door (Silver)
Created 20 or more Unique Topics
Posts : 2844
Honor : 0
Join date : 2011-11-23
@Gen: I used to use UFO AND SFM but UFO didn't help at all so I uninstalled it. Simple Followers mod is good enough for me yo. UFO is apparently better but it got super buggy in my one so I don't want to use it anymore lol

@Diss: I forgot to mention Civil War Overhaul but Gen already said it. Make sure to read the creator's nexus page so that you know what the mod does since it does MANY things. Also, he's quite funny