Spoiler:
I know it's a shit deal, but c'mon

Soo, I'm going to start reworking on that stage I had going for the competition 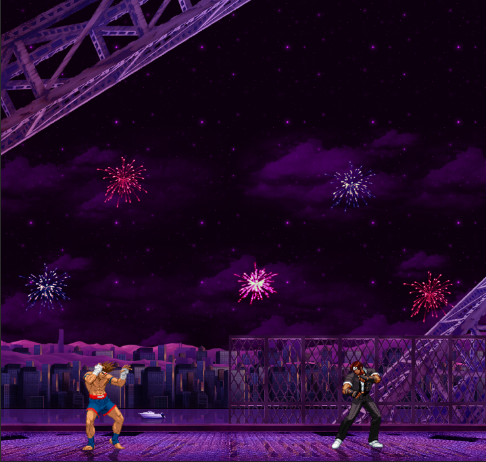 @Watta wrote:Mark, make me a floor sprite and I'll make you a seeeg?

Spoiler:
I know it's a shit deal, but c'mon

Fine. Describe what you want.

Spoiler:
But srsly , you should make your own floor. For practice.

As you can clearly see, I'm still adding/removing/editing lots of stuff. I'm trying to emphasize depth here which explains the blurring. I'm going to add a lot of clouds at different deltas as well to help. Still not sure about the fireworks though, it's a maybe at this point.


The rest of it bothers me. The lights seem too bright and consistent and they're not showing any kind of affect off the water either. They're just oddly placed there.

The dark purple buildings in the back look bad. Really clashy, they don't seem like they'd be a part of the city in front of it. Try searching for more fitting skylines.

sky is way too plain and purple. maybe a moon? or some clouds? along with some better color variety fireworks. maybe even some larger fireworks. (not xiii fireworks)

powerlines clash and don't make sense. I'd remove those. you can find better things to add in there and make it a bit more city like. maybe a water tower? some boat docks? etc.

Posts : 2284
Honor : 18
Join date : 2011-04-20
Suggestions:
- Maybe adding mountains can make it look better? Then Add a Hollywood sigh on the mountain BAM NEWAGE IN HOLLYWOOD PT. 1
- Small cars moving on the road?
- After some time passes, you'll be able to catch up to another boat that has people partying in it? Add a boat with Miku on it BAM LUMINACE CITY PT. 2
- Observatory? Antenna? Clouds? Spotlights? HOTEL GENESIS!?

The buildings in the background clash IMO.

I updated it a tad bit more.
http://prntscr.com/1jr1ex

I'm still in the process of applying all your feedback like a moon and whatnot.


@Mark: Mountains yes, I'm adding them (chinese ones at this point like the one in the screencap)
Moving cars? Probably not, maybe a train though :P

What do you guys think of the color idea for the building reflection? I know the sprites are screwed and I'm still working on that, but does the color look alright?

-Far back buildings will probably get removed, unless I can edit them to be better blending.
-I've already started putting the sprites into the stage template I made for this beforehand

TBH, it looks like shit right now, but I'll fix that. I'll give y'all a screenshot of that once I get more stuff     put into it.
-So I made some decent water, but I used the wrong template -_- Forgot to rasterize the layer style lol.

Right now, the whole sin.y thing is making the stage look quite messy man. I think it may be my coding but I'll post the template soon so you can see what I'm talking about

I might make it into a non moving stage, or possible add some BGCtrl coding to make it move only at certain times...


So after a while of looking at the stage in motion so far, it seems really dull. I think it's due to the lack of lights and glows in the city part. I'm not going to add any glows to the buildings, but I have an idea. How about a large white glow sprite which I could put over the city area to make the whole thing look as if it's glowing, giving it that city lights effect, y'all think it could work? I've seen Exshadow do it nicely, but I guess it comes down to my PS skills

Did a lot of editing today.
Here's the results 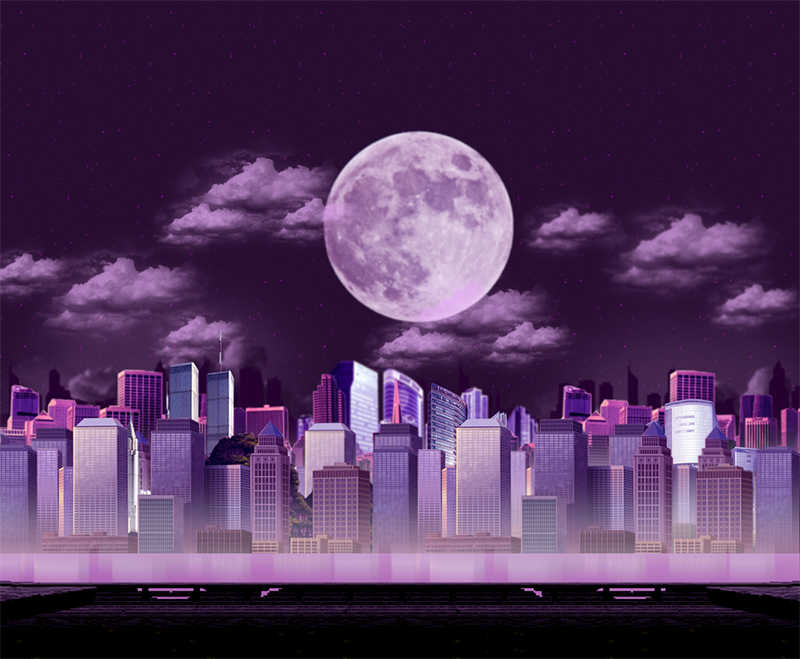 Not finished, but getting there slowly... Moon and sky are still looking clashy though

Posts : 183
Honor : 6
Join date : 2013-01-14
One thing that stands out to me is the buildings: they have what seems like varying light sources. Some building have brighter sides than others, yet the moon is the main source of light here, no? Maybe the moon is too large as well, but it looks a lot better off than it did before.

-Yep, gonna add some more clouds. I had an alpha for the stage competition stage ready which had some great clouds in unique movements and deltas, I'll try recreating it again.
-Gonna remove them back buildings asap
-The city is over and over BUT it will (and does) have some stuff that come less repetitively. Some of those odd buildings you see in there are an example. There might also be a boat too, depending on if I can blend it in just right.

The screenshots I'm posting are of everything that are going to come in the stage. This means that it will be much more spaced out in the actual thing. It looks cramped up in there because I wanted to show the different parts and cuz I'm too lazy to upload multiple screens and my net is shit

I just said that it will be a lot more spaced out in the actual stage itself which Im already working on. I put all the buildings in the concept to show you what they all look like :P

I do have mountains, I'm still rendering them right now.

Boat sprites are good, I have some I mean to use