If you are a good spriter and want to join in on this project, feel free to message or just say so in a post right here. If you join, you'll be given credit for your work and be known as part of the team that set a new standard for Mugen Megaman X and potentially creating an open sourced base for all future reploid creations.

During Wall Slide:
Punch
Kick
Buster Shot
Jump Off Wall will transition into a regular air state, which will allow him to perform default air attacks (punches, kicks, specials, etc)

Spoiler:
For anyone working on my project, you may experience me sending you practically the same or similar messages repeatedly until I get a reply, to reassure myself that you got my message. I understand at times that this may be annoying and I have no intention to bother anyone.

Your last photo is out.

@Vegaz_Parrelli wrote:Yooooo! These are some DOPE sprites! I hope you get some backup. I wanna see the end result of this, ya dig!?

I would really like to finish the character as well. I'm recruiting spriters and coders as possible. Finding spriters is really hard. :(

GLB wrote:Your last photo is out.

The animations seem clunky, though you claim their out of date so you may have updated that.
Cool project idea, i'd like to see more sprites for this.

The colors are outdated on the animations that are labeled as outdated and some lighting on the helmet. I'm working on making the animations more fluid, but it's difficult for me, because I'm a single sprite artist type of guy, not an animator.

The following are ideas for X Armor Hyper Combos:

Dragon Claw has a super/hyper combo where he jumps onto the wall and performs a flying crash, like a Nova Strike. I think imitating the same hyper combo with X wearing the Ultimate Armor would be appropriate for my X.


For a grapple hyper combo, I was thinking that the Gaia (sp?) armor could be be worn and he would perform a dash grab, probably a shining fingers grapple to the face of his opponent, drag them to the corner, sort of like Rugal of King of Fighters, smash them against the wall and then perform the Data Destroyer (is that the right name for that green energy attack?) When he performs the Data Destroyer, it can look bigger, sort of like Chun Li's hyper combo with that energy orb attack where energy surrounds her body.

For the Shadow Armor, perhaps doing something similar to Bovery23/Black Chaos's Strider Hiryu hyper would be cool. Like the one where he gets his opponent into the air and then performs multiple jumping slashes.

For the Falcon Armor, maybe a hyper combo into the air with mutliple projectiles falling from the sky would work. I forgot what it's called. The energy projectiles were blue, I think. (Sorry, it's been years since I've played the PS2 X games.)

I have asked Ramzaneko if he would like to take a shot at spriting these, because he said that he is an expert on what the armors look like and his Maverick Hunter Zero WIP looks great. So I would like to leave this work to him unless he turns it down.

By RamzaNeko, who is part of my spriting team

Here's the current WIP spritesheet for those are working on or want to work on this project:

For those who can code and want to help, let me know. So I can put you on this list of potential coders:

[/quote]I believe this made a great base. I edited it a bit. I hope you don't mind. I also recieved a picture for a big portrait over at IMT from A New Challenger. 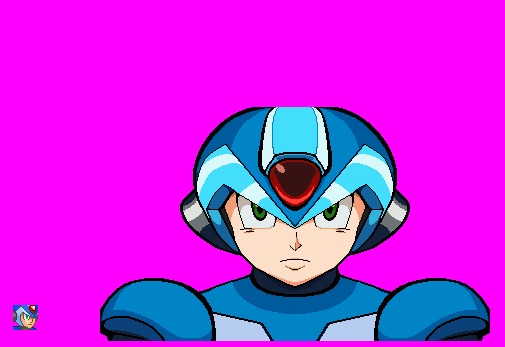 Guest
this is going to be an amazing project dudes keep it up!