Just when I thought I was out, they pull me back in. Let's not go into details as to why I'm here again.

As per usual, there's a Mugen 1.1 and a Mugen 1.0 version, and as always I recommend the 1.1 version, because Mugen 1.0 has lower quality sprites and effects. Heck, this time around I had to severely decrease the amount of effects the character has because it just caused too much lag in 1.0.

Movelist, special palettes and specific mechanic information can be found in the readme file Izayoi comes with.

There's not really any extra exposition this time. I've simply been snailing along and slowly building up this character for like half a year when I felt like it. Will I ever make another one? I'd say it's not likely, but I've been saying that the last 8 characters I've made. If I do ever return, expect Celica and her murder robot friend in 6 months+++, hah.

Often times I end up facing new challenges whenever I make a new character. The challenge with Kagura was... The entire Blazblue system, as well as his stances and charge moves. For Azrael, it was his entire weak point system, and especially Valiant Crash and Hornet Bunker.
So here we are with Izayoi, and the challenge for her was her entire dual-form and stock system, the extra UI that comes with it, and the absolutely huge amount of effects she has flying around compared to the other two. Thankfully, almost all of them were 2D effects, so it was possible to replicate them proper.

PS: Both Kagura Mutsuki and Azrael have had major updates, especially if you're carrying an old version from before 2018 started. The most important one being the addition of 11p(Kag)/10p(Az) Serious Mode. If you plan to pit them against Izayoi or each other, please fetch their newest versions as well. 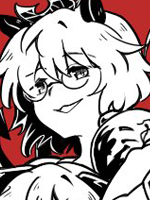 » Toonstruck 2 will be released if you want it bad enough!
» Perfect 2015 books are released !
» Les Miserables is now freeware (and A Tale of Two Cities is now released)
» Jonathon Boakes and The Last Crown
» Clandestiny for the MAC and iPad, hopefully for PC later.