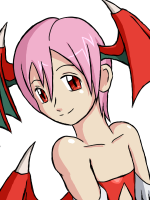 Check out her videos here
[You must be registered and logged in to see this link.]

Best known for her Lilith Edits and Street Fighter EX series stage conversions,
Yamori X of Trinity Mugen is a noteworthy creator that makes well coded,
bug-free complete characters.
She is frequently updating her work and her Lilith edits are a must-have for your roster.
Her characters work fine in both Mugen 1.0 and 1.1

Authors Notes:
Hi guys. Decided I'd like to see what you guys would think about this lil ol' IKEMEN Plus full game of mine. Gameplay style has been a work in progress over like a year or two by now, hopefully it's worth the time spent.

8 characters have been completed as of yet, i have a team for each char planned for a first full build, but for now, I would like to see what I did and didn't do right. Stages are just a bunch from a different set of games to represent each planned team in the game (i cant make stage are u crazy). Oh, and here's a video!

The System Rundown:
-6 Buttons
-Chaining a la MvC, but only for grounded normals. Aerials can't chain, with the grounded nature of the game.
-Any normal can now cancel into any special or super, no restrictions. Decided vsav's system was a bit restrictive, and I wanted something more explorative and freeform.
-Specials can also be cancelled into any super.
-CMD Normal chaining, a la KoF, but with a little more freedom. They can be cancelled raw into specials / supers, but still lose their special block properties when chained into, which also cuts the startup of said CMD Normals. Can be cancelled into from any normals, no restrictions either.
-Super Chaining, cancelling supers into other supers. A feature from my favorite fighting game ever. Will be a big focus of the game.
-ES Specials. Power up a special with an input of 2 buttons for 1 stock of meter. Will be geared a bit more to utility and combos. Can be cancelled into from any normal or special, on contact.
-Guard Breakers, another SFEX feature. Can be cancelled into from specials and supers, for an extra mixup kick. Input is universal (P+K of same strength) and costs 1 Stock of meter.
-Guard Cancels, feature from Street Fighter Alpha and KoF respectively, but a bit more akin to KoF. Input is EX2's Excel input (LK+MP, MK+HP, HK+LP), also costs 1 Stock of meter.

also theres a [You must be registered and logged in to see this link.] if u are interested in the game or matches or somethin

Re: Mugen Creations By Yamori X