Posts : 39
Honor : 1
Join date : 2010-06-22
He is best described as a subtle blend of Cammy, Blair, and Adon. This mix makes him an intense rush-down character with decent mix-up abilities. Once he gets in, his opponent can't really do much to stop him.

This character along with my other upcoming releases uses a unique control system. It essentially a mixture between Bloody Roar's button setup (minus the morph mode) and Street Fighter IV/Street Fighter EX plus Alpha (Canceling and motion/charge centric specials).

Normal Attacks:
Use the direction pad along with the P or K button to perform a diverse variety of attacks.

Taunting:
Use taunts by pressing T (B button) to either boost your health or gain power meter.

Canceling:
When you make contact with your opponent and have at least one level of super meter press T (B button) to cancel the attack.

Specials:
Using the direction pad allows you to control the distance of various specials. (Please check the read me file in the .rar file to get an idea how to perform his moves.)

Known Issues
[s]Very bad AI, I will be fixing this in the future.[/s] His AI is cheap instead of poorly programmed.
[s]Repetitive vocals. If anyone can speak with a decent Australian accent, please assist.[/s] I've contacted Chosis to help me.
Possibly too cheap, he is a juggling powerhouse.
He and my other characters use system fx for hit sparks.
He has a lot of command shortcuts.
His Comet Rush (Dive Kick) can be executed just off the ground, which was purposely made that way. 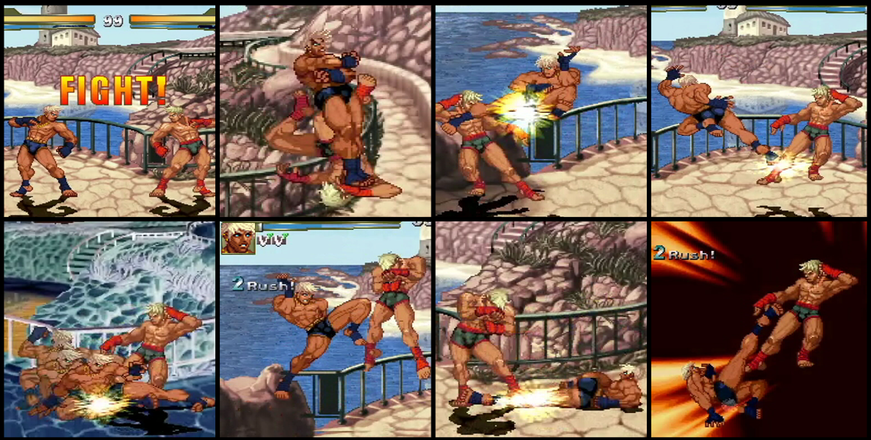 » The BETA Thread
» Can You Name This Game Character
» My Fantage Character - What do you think?
» How do you make your fantage character, your avatar?
» Stockfish beta