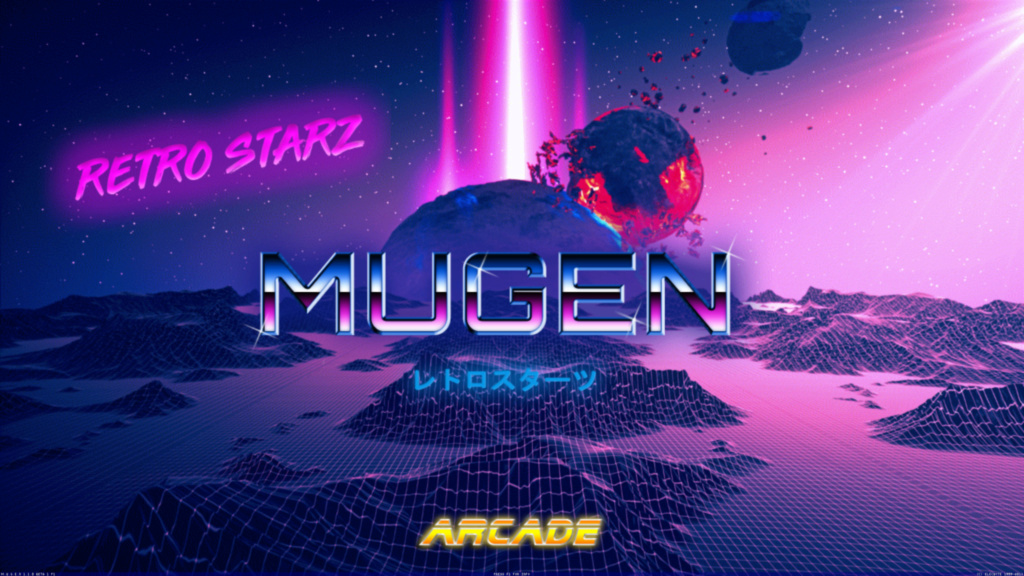 Hi guys, a subscriber on my youtube channel recommended this website and it does seem very cool so thought i would join and share my work. Anyway i have been working on my own Mugen build for a while now and have a youtube channel showing gameplay etc as i develop it.

It is called "Retro Starz Mugen" and is a 80's synth / retrowave / cyberpunk inspired build.

I will be working on this for years and have loads left to do, i use Mugen 1.1 and will be enlarging the rest of the stages, giving them massive amounts of zoom if the stage background is compatible etc, Editing all characters to be compatible with Mugen 1.1 including resizing projectiles / beams etc to reach the ends of the screen, fixing intro & win pose positions so they dont teleport to different positions, removing outdated super backgrounds and quite a lot more to get them working properly with 1.1 and my big stages.

I have a few more things to do on the screenpack itself like add more round logos and announcer clips, create a credits & game over screen, finish the victory screen with animations etc, add a screen animation before the main menu one (i am thinking a VHS style boot up screen).

Below is a link to one of my latest videos, i have done a fair bit of work since this video was uploaded but i shall be uploading a more up to date video over the next couple of days, also my youtube channel is: https://www.youtube.com/channel/UCzIIGVurDpEqlYzwnAa8VhQ

The style and format of your fight.def that you are going for resembles another project I am aware of called Retroversus by Acemillion.

Also xxEnchanter.zuxx ramble away man ha, i know some of the stages are zoomed out quite a bit but mainly on the ones where the background is compatible and i will be editing all characters to work properly with large stages etc as seen in the new video (resized beams, projectiles go the full distance, extended hit boxes etc etc).

Secondly, this is not only in all my fav colors, but the synthwave vybe is totally awesome.

Posts : 3
Honor : 0
Join date : 2018-10-31
Hi guys, sorry late replying to anyone, first of all thank you for your great comments! Ok i have uploaded a new video explaining some changes i will be making and showing examples of this. What i will be doing is removing zoom from all stages and making them smaller.

This is partly due to feedback received but i have changed my own mind also after lots of testing there are just too many issues with zoomed stages and especially large stages. It breaks nearly every character in some way and in order to get this finished and uploaded for people to download sooner i have had to sacrifice zoom and large stages.

It would probably take me years to edit the code for 500ish characters manually to get them working right with my Mugen. now nearly all mugen characters can be installed without having to change their code whether its intro, outro, supers, melee supers, beams / projectiles etc.

Another flaw with zoom is if using slower characters in arcade etc the match will always go to a time out as you spend all the time chasing your opponent down which is no fun. The smaller stages also add to the nostalgia feel in my opinion which is the whole point of me creating this screenpack in the first place, to feel nostalgic.

I will now be editing all the stages (again ha) to match the ones seen in the videos and then adding characters to fill all the slots. Because this now cuts out a massive heap of work i can release a version sooner and aim to have one up for downlaod around Christmas time I will upload on both this website and my youtube channel.

Lastly i have been messing with some reshade setings again and added CRT scanlines, lumasharpen, MSAA, CRT curves & chromatic aberration with 3840x2160 (4k) resolution setting. I shall be creating some more Reshade presets and will include them with the game when i upload it.

You mentioned you are using 4k resolution.

Re: Retro Starz Mugen (In Development)