These are being added officially (with again, no set deadline.)

I'm awaiting more billboards for City's Buildings and then I'll code those in, recode fireworks once we have new ones, and send out for final testing.

Evacuate Redux I'm waiting on Mark to do something when he's less busy. We're in no rush. But there's been a lot of work done already, so it shouldn't be a slow process.

We just got news of Watta's temporary retirement, so I'll be finishing his stage (Before The City Sleeps) for him. Since he left no PSD and I'm reworking the original image along with most of the work he did already I'd say it's about 60% done.

We just got news of Watta's temporary retirement, so I'll be finishing his stage (Before The City Sleeps) for him. Since he left no PSD and I'm reworking the original image along with most of the work he did already I'd say it's about 60% done. 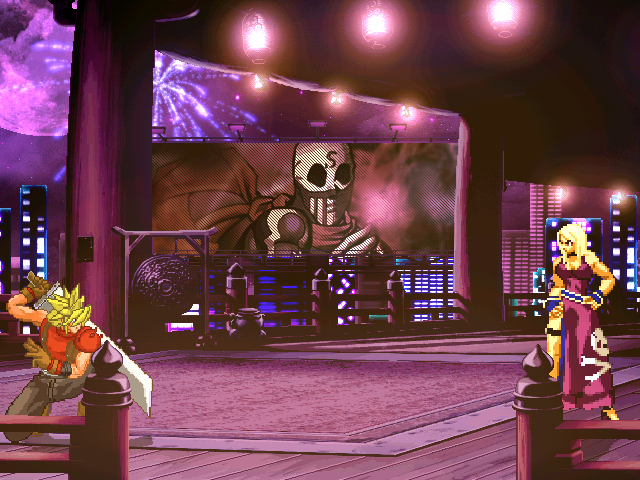 Got the billboards animated in now, the Skullo is one of 7 now currently, there may be more. Still some edges that need to be cleaned, an overlay to the board, more fireworks, replace background city, and have Alpyne remix firework SFX into the BGM. Me and diss are almost done with it.

Most of which are already completed or more than half-way done. So we think it's not out of line to finally set a deadline and get the ball rolling officially. Dissidia and I concluded that April 30th is a good date. This is putting work/school/personal life into account for the contributors involved. We didn't think it was too out of line. If there's something wrong with that date, let us know. That's 18 days to finalize the projects left. Which is 3 stages. City's Buildings is near complete and can be finished in a solid day of work (I've been busy with work IRL, or it'd be done already.) I cannot speak on WattaWright and Markpachi's behalf though. I did the basic set up of animations and aesthetics on Evacuate Redux, and sent it to Markpachi. I'm waiting on him to put some good finalized ideas into it, like color clean ups and such. He's been busy with IRL stuff, so he'll probably find some time eventually.

Posts : 3407
Honor : 74
Join date : 2010-02-27
So I'm dropping Evacuate Redux. I have plans for it that I probably won't be able to make in the deadline without help, and MP's been busy as of late. So I'll release it separately later on, or maybe even in the last pack part very later on.